The small community of Kimball, deep in the coalfields of southern West Virginia’s McDowell County, is an improbable site of the nation’s only war memorial of its kind honoring the memory of African American WWI veterans. The Kimball War Memorial is the nation’s first and only building honoring Black soldiers that fought in World War I. Most Americans are unaware of the history of black service in WWI and that black troops made up one-third of the total U.S. fighting force. Remarkably, 1,500 of these African American soldiers came from McDowell County.

The memorial was dedicated in 1928 and served as a center for community life until the early 1970s when the building began to deteriorate. A fire in 1991 left only a roofless shell. In 2000, local efforts led to funding for restoration, which won an award from the prestigious American Institute of Architects.

I became acquainted with the McDowell County memorial and its board members in 2005 while working on “Fighting on Two Fronts: The Untold Stories of African American WWII Veterans” a documentary film about black soldiers in the segregated military. One of these veterans, Board of Trustees President E. Ray Williams, asked me if I might be able to find “a few photographs of black soldiers in WWI” the next time I was doing research at the National Archives. The walls of the memorial building had been bare since the restoration because most of the original artifacts and documents had perished in the fire of 1991. Two weeks at the Archives and 500 scanned photographs 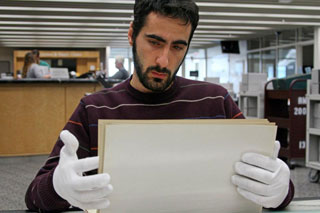